The 2022 NFL Draft is tonight, a culmination of a months-long NFL draft process for hundreds of college football players. The public has grown much more familiar with many of the prospects who have the potential to go in the first round due in part to all of the mock drafts, online content and on-air debates about what teams need and where different players will go.

As a result, some trends have arisen. Let’s take a look at them.

That would be Ahmad “Sauce” Gardner.

Gardner, the cornerback from Cincinnati, has seen his followers on Twitter and Instagram skyrocket during 2022. His Instagram followers have increased from 81,805 on December 30th to more than 225,000 as of April 27th. That’s a 175% jump.

Gardner is the most-followed first-rounder on Instagram — thanks to the rise in followers during the NFL Draft process.

Gardner doesn’t have the most followers on Twitter among the first-round prospects. That would be Ohio State wide receiver Chris Olave (69,300). But Gardner saw the largest jump in percentage of followers during the NFL Draft process at 203%.

THE FOCUS IS ON THE EDGES

Oftentimes, the biggest stars in an NFL Draft are quarterbacks.

This year, that’s not the case.

Defensive Ends Aidan Hutchinson (104k), of Michigan, and Kayvon Thibodeaux (100k), from Oregon, both rank in the top-10 of most-followed draft prospects on Instagram.

Hutchinson and Thibodeaux are also the third and fourth most-followed athletes on Twitter. They trail the Ohio State duo of Olave (58,419) and Wilson (44,356), with Ole Miss QB Matt Corral (36,800) finishing fifth.

THE TOP QUARTERBACK OF THE DRAFT?

This draft doesn’t have massive stars at quarterback like many have in years past, but Liberty’s Malik Willis has turned into one of its biggest during the NFL Draft process.

Since Dec. 30th, Willis has had the highest growth on Twitter, by raw numbers, at 20,449 followers. He’s relatively active on the platform — unlike many NFL Draft prospects.

He’s used his growing social-media following and status as potentially the first-QB taken in the NFL Draft to land deals like this.

From one legendary QB to a future legendary QB, we’re keeping @DangeRussWilson and @malikwillis ready and connected for all of life’s biggest moments. Good luck at Draft! https://t.co/QVJwTTCgf8 #TeamBose pic.twitter.com/xVqrtk2ChE

In his final mock draft, ESPN’s Todd McShay has Willis as the first quarterback off the board, with the Steelers selecting him at pick No. 20. McShay only has one other QB, Pittsburgh’s Kenny Pickett to the Lions at No. 32, taken in the first round.

Ole Miss’s Corral, Pickett and North Carolina’s Sam Howell all seem to have the potential to be taken in the late first round or early in the second round. They are also grouped together as the 10th,11th and 12th most-followed potential first-round quarterbacks on Instagram. Corral has more than 96,400 followers, with Pickett (73,600) and Howell (72,600) finishing right behind the Rebels’ signal caller.

To gain access to all of this information, you can purchase our complete database of FBS players’ emails, social-media accounts, follower counts and growth rates. It’s updated every two weeks, with updates sent out to our customers via email. 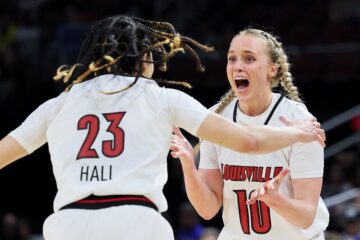 With the NCAA Men’s Basketball Tournament kicking off later today, let’s look at which players saw the largest amount of growth (by percentage) amongst their Instagram followers over the past two weeks — a stretch Read more…